The Lantern: A Modern Café for Modern Students 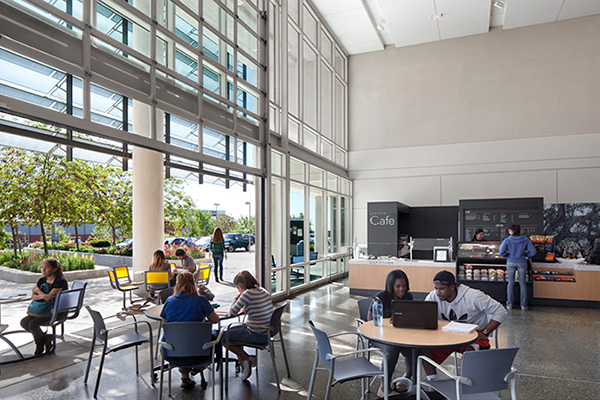 When we were asked to upgrade the existing Lantern Café at UC Merced’s Leo & Dottie Kolligian Library, Principal Amy Eliot and I began with interesting challenges in this regard. The first challenge was “look like you live there.” The cafe occupies the atrium of the campus library, designed by Skidmore, Owings & Merrill and Fernau + Hartman Architects. A natural hub for the campus, the atrium features extensive glazing and a very modern, understated interior. The existing café had grown organically, made from different parts, and was now looking messy in such a tidy space.

Our second challenge was “do no harm.” The finishes in the atrium, especially the terrazzo floor, were to remain untouched. Floor power outlets could not be moved, which limited the size and configuration of the café. The existing structure and layout of the building prevented us from cutting into the building to bring in plumbing. Our client, UC Merced Dining Services, the operator of the café, instead used a system of mobile water tanks tucked underneath the countertops. Fresh water is carted in two or three times a day. 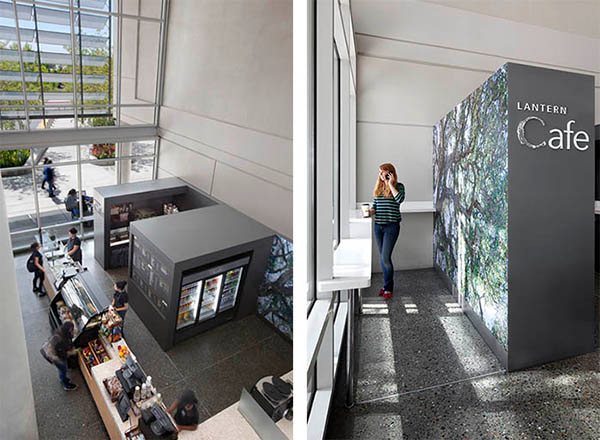 Our final challenge was to make the café look permanent. We drew on the idea of a museum café, which led us to choose a clean, crisp architecture that would look at home in the very modern atrium. An enclosure of plywood cabinetry finished with plastic laminate conceals the back-of-house area, which was important, given that the café is surrounded by open space on three sides—not to mention visible from above. The dark gray color of the plastic laminate was selected to unify the café with the color of the existing floor.

Countertops are IceStone, made of recycled glass and concrete—we picked it for its recycled content, low-VOC materials and finishes, and cradle-to-cradle design, as well as for its speckled pattern, which complements the similarly speckled pattern of the floor. Plus, it’s as durable as stone and looks great.

Our in-house graphic designer, Elise Parker, designed the graphics for the café, including the menu, placement of the Lantern’s original logo, and a couple of wall-sized photographs of live oak trees which referenced the oaks of Merced’s landscape. This really brought the architecture and graphics together and made the café look like one complete unit.

Cafe before (left) and after (right)

The whole thing was mostly built offsite and then assembled in the space in three days during the winter intersession. Since the new café opened in January, revenue has tripled. Within an hour of opening, the café’s Facebook page picked up 250 “likes” from students. There are daily lunch specials, such as a build-your-own taco and clam chowder. The biggest seller is the Spud, a large, overstuffed baked potato.

Within three months, revenue from the café paid back all the construction costs.  Now the students have their food close at hand, in an environment that fits seamlessly into their study space.

Time for a Party Art & the Unexpected Contemporary Access Programming a Nonexistent Existing Building Learning by "Leap" and Bounds Back to the Healthcare Future Recharging the Street Summer Reading: June Summer Reading: Final of the Series You Also Have to Remember to Look Down Kids on the Move The Opportunity/Constraint Tango Learning from Beale Street The Architect as Volunteer for Education and Social Justice: an interview with Amanda Hoch, Diana Rodriguez, and Maryam Rostami TEF Alumni Notes The Architecture Profession - The Interns' View TEF Alumni Notes Restoring Warnecke’s Asilomar Additions: A Conversation with Andrew Wolfram and Bridget Maley Care and Comfort: Designing Kaiser Permanente Northern California's First Inpatient Combined Medical-Psychiatric Unit A Message to our Friends and Collaborators SOLIDARITY