Art and Identity at Garfield Center

This is the first of three posts about the integration of artwork — and the artists behind them  —  into the newly renovated Garfield Center (a joint venture between TEF Design and Paulett Taggart Architects) and its role in the development and sustainability of culture and community. 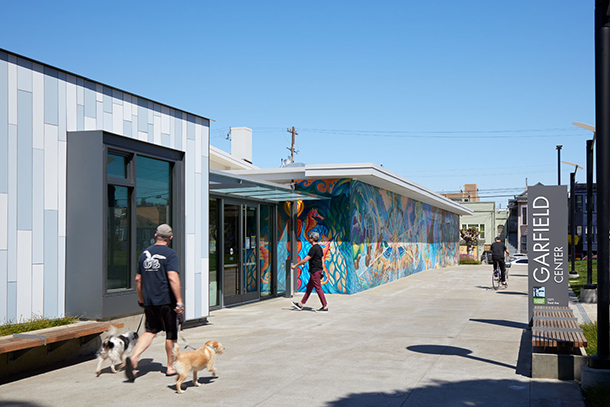 The new main entry to Garfield Center along the south façade, provides connection and features a newly restored and expanded Precita Eyes mural.

Garfield Pool was designed by noted San Francisco architect William Gladstone Merchant and dedicated in December 1957 in the Mission District’s Garfield Square park. With its concrete structure, ribbon windows, shed roof, glass walls, strong horizontality, and minimal architectural ornamentation, the pool building exemplifies the hallmarks of the International Style. When the San Francisco Recreation and Park Department (RPD) decided to renovate and upgrade the Garfield Center complex a few years ago, foremost in everyone’s minds was preserving the qualities that have made it a beloved and integral presence in the community for so long. In addition to maintaining Merchant’s masterful architecture, that meant keeping the colorful mural adorning its southern edges — even though the mural itself is not technically historic.

By law, all buildings constructed more than 50 years ago that embody architectural or historical significance can be considered potential historic resources. After the RPD selected our firm for the project (as part of a joint venture with Paulett Taggart Architects), we asked Architectural Resources Group to prepare a historic resource evaluation of Garfield Square and its buildings. The report found the pool building would likely qualify for landmark status in California, significant both for its association with the RPD’s postwar efforts to expand and improve the city’s recreational facilities and for its status as “a fine example of the International Style as interpreted by notable architect William G. Merchant.” 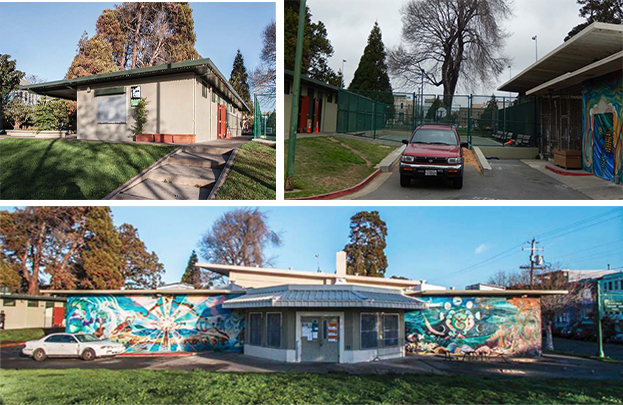 Prior to renovation, the fenced-in exterior interstitial space, used primarily for on-site RPD storage, prevented meaningful connection between existing natatorium and fieldhouse uses (top, left and right), reinforcing inequities in the surrounding community. The non-conforming, 1987 entry addition (above), which partially displaced the colorful Primal Sea mural by Precita Eyes, was removed as part of the renovation, and the mural, lovingly restored.

However, the park’s fieldhouse, which followed in 1966, was not associated with significant events in the city’s history, and didn’t represent a distinctive example of the midcentury modern style. Therefore, although also older than 50 years, it could be demolished to make way for a new club house with a multipurpose room, kitchen, restrooms, and office. 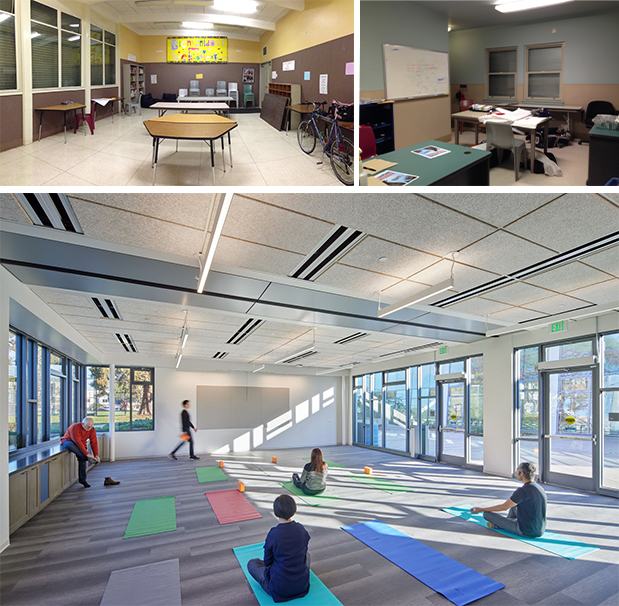 The existing “fieldhouse” (top, left and right), which supported community programs targeting at risk youth, was replaced with a new Clubhouse comprising a kitchen, restrooms, and flexible multipurpose room (above) that opens out to the courtyard.

That left the mural to consider. In 1980, the local nonprofit mural and arts education group Precita Eyes Muralists Association painted The Primal Sea on the pool building’s south wall on either side of the entrance. Twelve feet high and 90 feet long, the mural depicts whimsical underwater and beach scenes, peopled by swimmers, deep-sea divers, sea creatures, and gods. In 1987, a small five-sided lobby had been constructed around the entry, extending out toward 26th Street and covering part of the mural.

The report determined that The Primal Sea, only 40 years old, was “not among the building’s character‐defining features”—at least according to the California Register of Historical Resources’ criteria. However, it is such a strong part of the building’s identity that when we embarked on renovating the facility, keeping the mural was a given. It’s beloved in the community, one of numerous murals in the area that Precita Eyes has painted in the 40+ years since its founding. We even found an opportunity to bring Precita Eyes back.

The glazed lobby (top) connects multiple uses throughout the complex while supporting secure use of the clubhouse and public restrooms after hours.  It also provides views to a new exterior courtyard (above) and recreational amenities, including a splash pad and barbeque.

We relocated the pool building entrance to the southwest corner, creating a new glazed lobby that links old and new structures and provides a secure point of access for both. Before the renovation, the only way to reach the pool was through the men’s or women’s locker rooms. The new lobby improves accessibility by allowing visitors to enter the pool directly, as well as through the two locker rooms (now joined by a third, for families).

Because we were removing the old front entry and the 1987 lobby addition, that meant a sizable gap in the mural could finally be filled in. Precita Eyes returned to repaint the mural and link its two sides harmoniously. One day, when we were visiting the site, we met one of the painters, Patricia, and were delighted to learn she’d painted the original in 1980. 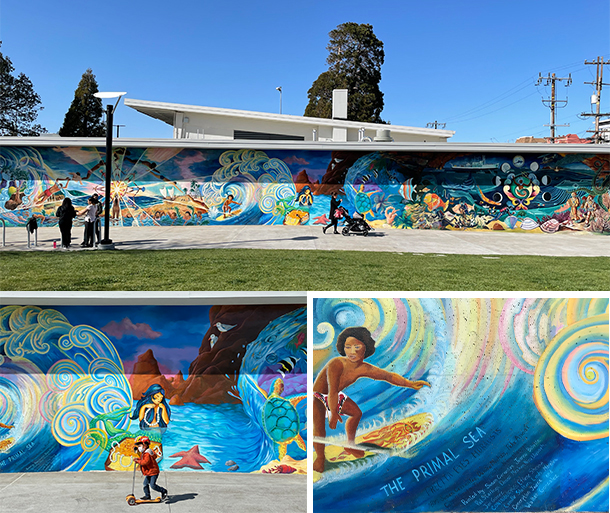 The full elevation of the restored Primal Sea mural (top) can be appreciated from the open park lawn it faces. A close up of the restored portion of the mural (above, left and right) features both whimsical seascapes and underwaterscapes.

In addition to restoring this piece, the city of San Francisco earmarked two percent of the overall project budget for public art. The RPD chose the upper portion of the glass that extends along the courtyard side of the pool building as the site for a new art piece. Next, the RPD held two artist selection panel meetings to winnow a field of 16 artists down to three for the San Francisco Arts Commission to choose from. The commission selected Oakland-based artist Favianna Rodriguez. Her 113-foot-long glass mural, Santuario, celebrates the Mission District’s long history of Latino families, with colorful imagery depicting waves, rolling hills, the sun, and children. 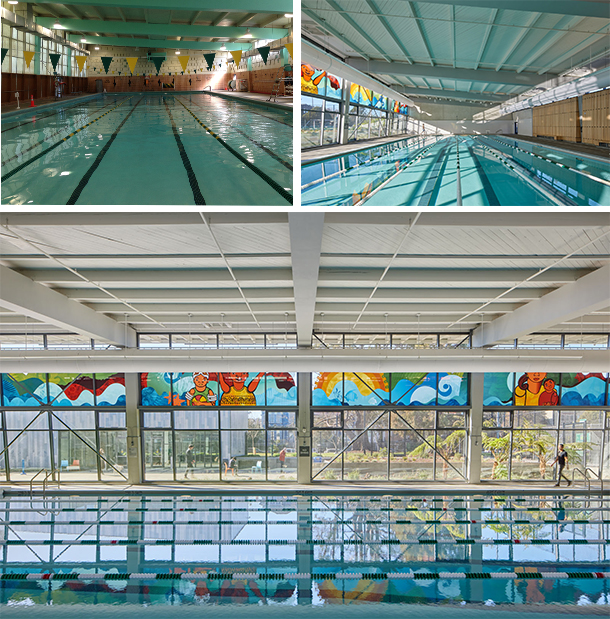 The existing canted western façade of the natatorium — infilled over time with opaque panels (before renovation, top left) — was replaced with glass curtainwall, flooding the pool house with natural light (after renovation, top right and above).

The pandemic shuttered the city’s parks and pools, only highlighting how vital they are to community life. Dedicated in March, the revitalized Garfield Center is set to open to the public this summer. The old and new buildings, combined with the old and new murals, will serve an important functional role in the neighborhood’s health and resilience, responding equitably to the Mission District’s wide range of recreational and educational needs while strengthening its role as a rich cultural hub for community-building and youth services.