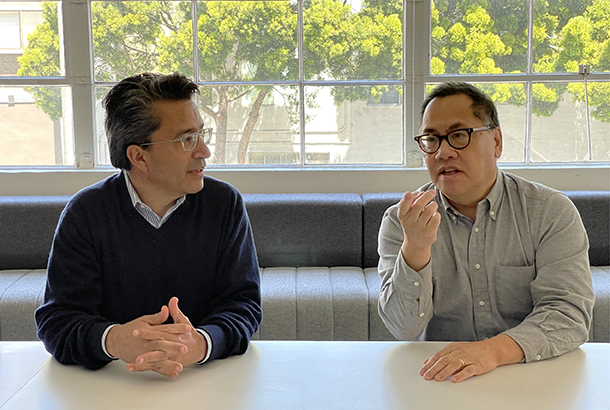 As we mark our 25th year in business, we sat down for a conversation with someone who played a key role in the firm’s development: Edgar Lopez, former San Francisco city architect and deputy director for buildings at San Francisco Public Works. He and Doug Tom know each other from way back, when they were both on the AIA San Francisco Board of Directors. In TEF’s early days, Doug, Amy Eliot, and Bobbie Fisch would periodically have dinner with Edgar.  He was curious about our young firm’s progress and they always asked him for his thoughts and advice. After 30 years with Public Works, he’s now an independent consultant.

TEF has had a number of consecutive term contracts with Public Works. From those have come a wide variety of projects:  the Bayview Opera House, the Treasure Island Temporary Fire Station, planning for the City’s Health and Human Services Department and the Japanese Tea Garden, upgrades to the Mission Cultural Center, programming for the new police station headquarters on Third Street, the renovation of the Emergency Operations Center on Turk Street, and work at San Francisco General Hospital.  In addition to that work, there have also been several branch libraries, the PUC Headquarters, and the Garfield Center — projects managed by Public Works. 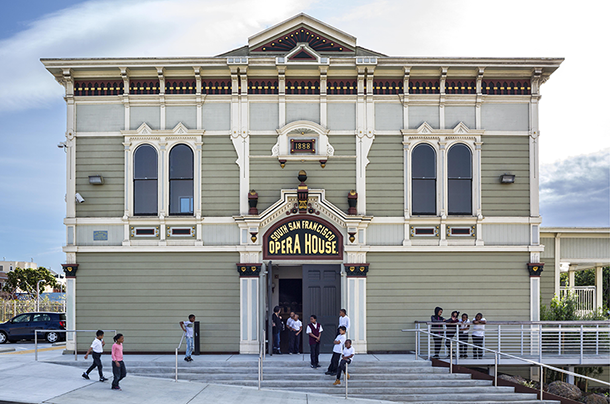 Doug Tom: How did you come to work for Public Works?

Edgar Lopez: When I was a senior in college, I worked at a large well known Architectural firm. The projects were wonderful, but the scope of my assignments were limited and I had no level of responsibility.  From there I went to work at a small firm, where I had more responsibility, but the hours were endless. Then I connected with a friend of mine who I’d graduated with and he told me he worked for Public Works and had a lot of responsibility there. So I had an interview, got hired, and realized there was an abundance of projects. If you work hard, they gave you more interesting projects. I had the chance to work on a brand-new building when I had three years of experience and I had the benefit of being surrounded by amazing consultants who were equally excited about the work.

Tom: Since you started there, Public Works’ reputation among Bay Area architecture firms has improved significantly. What happened?

Lopez: When I joined, innovation and creativity weren’t an essential part of the culture. We specialized in small renovations and took care of basic infrastructure. In the mid to late 1990s, when the economy was down, a handful of architecture firms began calling for the City to get rid of the department, saying “Why should public service architects have these projects that fall into their lap, when tax-paying local firms need work?”

TEF collaborated with Public Works on the second-floor tenant buildout of a privately developed, mixed-use complex to house the Glen Park Branch Library.  A public-private partnership, the project broke new ground in its relationship to adjacent building uses and quickly established itself as a civic anchor for the community.

Tom: That was about the time when you and I joined the board of the San Francisco chapter of the American Institute of Architects. I’m thinking you joined to dispel the negative impression of the Bureau.

Lopez: It’s true. People were labeling us without even knowing us, even though we had the same education, the same background, the same aspirations as they did. Our strategy was, rather than fight over limited work, how do we develop and create more work that benefits the City and the architectural constituency? Things got a little better. Then the economy improved, so that helped. Now I’m good friends with some of the folks who wanted to get rid of us, and I even hired some of them. We need good architects in public service. I would sometimes tell principals, if the Bureau didn’t exist, you would be negotiating your scope of services with someone who doesn’t appreciate design and simply cares about the bottom line.

Tom: How did the change come about?

Lopez: In the late 90’s we held a retreat where we defined our core competencies. We identified that we were really good at doing remodels and seismic upgrades, but we weren’t producing high-quality design.  As a result, we started hiring people who had the skillset to improve our design work and could manage design. When the Branch Library Improvement Program was getting underway to build or renovate 24 branch libraries, I remember a commissioner challenged our design credentials and wanted us to step up the quality of the work if we were going to be designing new buildings.  This gave us the opportunity to focus, hire architects who could lead the work, and create an in-house studio dedicated to this client. 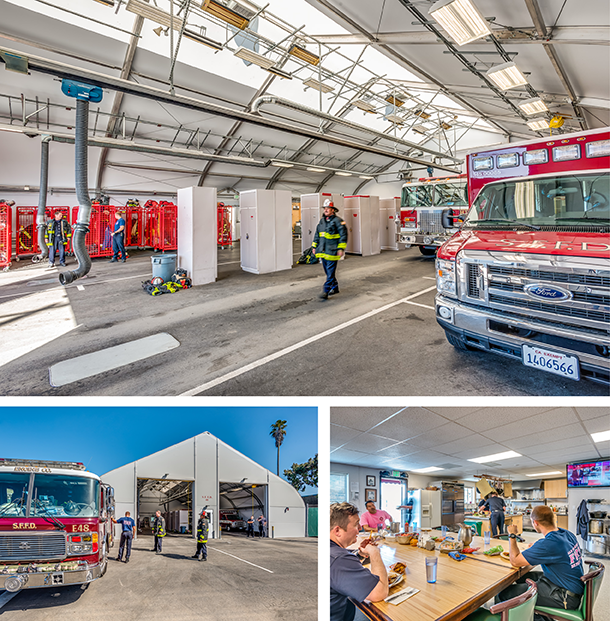 Declared an “emergency project” by then Mayor Ed Lee, TEF led the accelerated design-build effort to replace Fire Station #48 on Treasure Island with a temporary facility. The design team leveraged modular construction and a sprung structure apparatus bay in order to deliver the the project in the shortest amount of time, completing the project in from start to finish in 7 months, even with site underground issues.

Tom: We were fortunate to work closely with you and your department during most of those years, and we loved the chance to work on the renovation and additions to three branch libraries.  But we were also lucky to have had several consecutive as-needed contracts.

Lopez: Luck had nothing to do with it. You never took the work for granted. Your responses to the RFQs were thoughtful and good quality. Also, you rotated your consultants—you had many of them that you were mentoring. 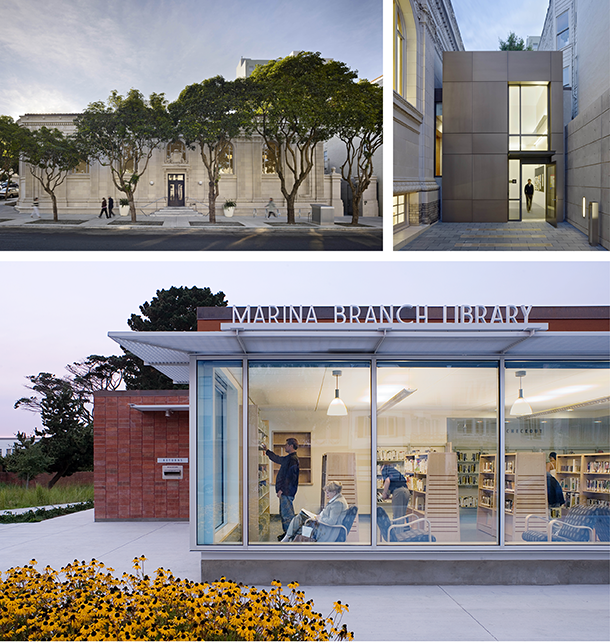 A local micro business at the time, TEF partnered with Field Paoli for the first of several branch library projects.  Located in San Francisco’s Marina District, the project encompassed renovation of the William Merchant designed, mid-century building and the addition of a new reading room (above). The award-winning rehabilitation of the Golden Gate Valley Branch Library (top left), a collaboration with Paulett Taggart Architects, integrated a new building addition (top right) to the historic Carnegie jewel.

Tom: When we started, we were a micro business, and then over the years, primarily through DPW, we partnered with a number of larger firms. And now we’re in the position to mentor other micro businesses.

Lopez: We appreciated that you give small firms meaningful work, where they can actually learn. Some of the big firms would use the local business enterprise program as if it were their drafting service, and they wouldn’t invite the small firms to all the client meetings. That doesn’t help the smaller firms understand how clients make decisions, understand budget implications, and understand the politics. 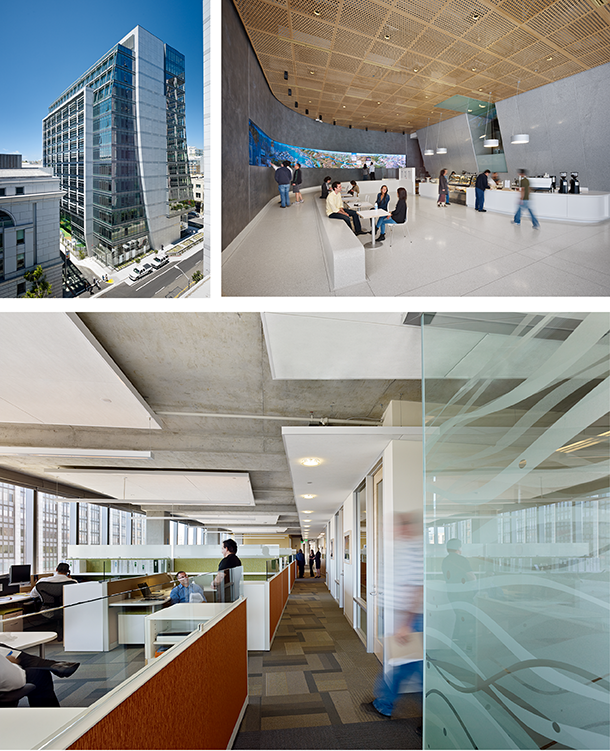 TEF was consulting interior architect to the KMD/Stevens joint venture for the SFPUC’s landmark headquarters located a block from City Hall. The LEED Platinum project was one of the greenest government developments at the time of its completion.

Tom: We have worked on some memorable projects together. One that comes to mind early in our practice was designing the interiors for 525 Golden Gate, the San Francisco Public Utilities Commission Headquarters.

Lopez: Yes, the City had never commissioned a brand new office building before, and the commitment to getting LEED Platinum certification was unprecedented. It was one of the first new LEED Platinum office buildings in California and the country. Another memorable project was Fire Station 48 on Treasure Island, the temporary fire station. That was a quick turnaround project. There was a high level of trust between the Bureau and TEF, so we didn’t have to spend a lot of time trying to define the scope first, we just started with doing some test fits. 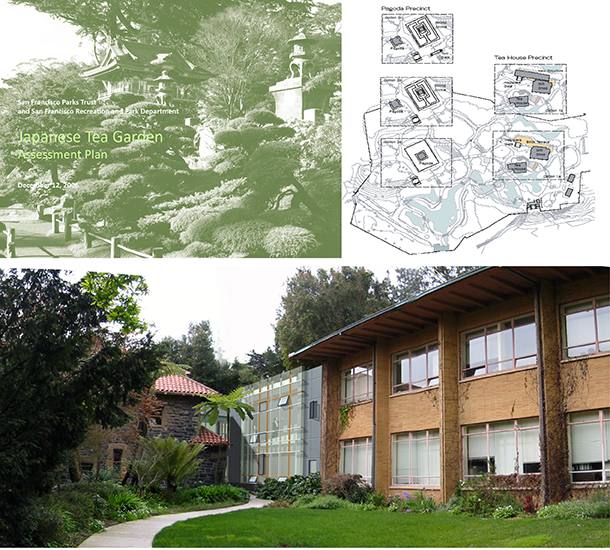 TEF completed a number of planning studies as part of multiple term contracts with Public Works over the years, including a master plan for upgrades to the Japanese Tea Garden (top) and a feasibility study for the expansion of McLaren Lodge, both in Golden Gate Park.

Lopez: I left Public Works in early 2019  and started a consulting business. I advise public and private sector clients in the delivery of complex capital projects in the Bay Area. For example, I worked with an international developer to pursue a billion dollar project in San Francisco, identifying local talent they could work with and advising them on how to deliver projects in the Bay Area. I’m advising two Bay Area counties on how they can raise the bar on design excellence by including design as a basis for selection in their RFQs. I explained to them that you should hire architects the same way you hire your brain surgeon. You don’t start by asking how much they cost. You look for the right surgeon first, and then you talk about cost. I’m also recommending that they break down the selection process, so small firms get small projects, medium firms get medium-sized projects. Otherwise, large national firms scoop up all the work, and they aren’t necessarily the right fit to take on small projects anyway.

Tom: We really appreciate you taking the time for this chat, Edgar. We’re proud of our first 25 years, but we’re excited about the future as well, and we couldn’t have done it without people like you.

Lopez: I can’t wait to see where TEF is going to go as you continue your trajectory.

Time for a Party Art & the Unexpected Contemporary Access Programming a Nonexistent Existing Building Learning by "Leap" and Bounds Back to the Healthcare Future Recharging the Street Summer Reading: June Summer Reading: Final of the Series The Lantern: A Modern Café for Modern Students You Also Have to Remember to Look Down Kids on the Move The Opportunity/Constraint Tango Learning from Beale Street The Architect as Volunteer for Education and Social Justice: an interview with Amanda Hoch, Diana Rodriguez, and Maryam Rostami TEF Alumni Notes The Architecture Profession - The Interns' View TEF Alumni Notes Restoring Warnecke’s Asilomar Additions: A Conversation with Andrew Wolfram and Bridget Maley Care and Comfort: Designing Kaiser Permanente Northern California's First Inpatient Combined Medical-Psychiatric Unit A Message to our Friends and Collaborators SOLIDARITY The Language of Connection: An Interview with Artist Favianna Rodriguez Maryam Rostami on advocacy and well-being Jennifer Tulley on the entrepreneurial mind and what’s next The Art of Craft: A Conversation with Rachel Hammond, Justin Tang, and Kate Thorson Connecting People to the Waterfront: TEF’s History of Design at the Edge of the San Francisco Bay Connecting Community Service and Engagement: A Conversation with Mrunalini Kulkarni, O.J. Monegas, and Glynis Nakahara The Art of Collaboration: A Conversation with Tatiana Bilbao, Sam Miller, and E.B. Min Navigating the Future of Work in Hybrid Workplaces: A Case Study An Interview With Patrick Bell: Business Advisor to AEC Firms